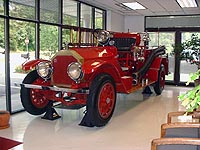 The Southern Pines Volunteer Fire Department was organized on February 13, 1898, after a fire destroyed the Central Hotel, and a public outcry for an organized fire department was heard. At that time, the Town of Southern Pines was only 10 years old. To aid the new department in firefighting efforts, the town commissioners procured 200 water buckets. Each volunteer member was required to pay $0.05 dues per month in order to retain his membership with the department.

There were 38 volunteers when the department was originally formed. In the early 1900s, the town installed fire hydrants in the business district to enhance the fire department’s firefighting capabilities. Other equipment used by the department during the early 1900s included one hand-drawn engine, one hook and ladder, and two hose reels. In 1916, a Chemical Truck was purchased.  It was stored in Prillaman's Garage on NE Broad St.  Prillaman's men were in charge of taking care of the Truck.

In 1925, "Old Betsy," an American LaFrance, was purchased from Utica, NY.  By now, firemen were being paid $6.00 annually to serve as members of the department. A new fire station was built in 1927 at 135 E New Hampshire Ave.  Many dances and community events were held as fundraisers for the department. In 1935, a new fire truck was purchased by the town.