Create an Account - Increase your productivity, customize your experience, and engage in information you care about.

The oldest home in Southern Pines, the Shaw House was built by Charles C. Shaw and his wife Mary when they settled in the Pine Barrens at the crossroads of Morganton and Pee Dee Roads in 1821. A first generation Scottish settler, Shaw acquired 2500 acres to farm and harvest timber for the production of naval stores. Land from this estate was purchased from his heirs for the establishment of Southern Pines.

One of his 12 children, Charles Washington (Squire Wash) Shaw, inherited and lived in the house, becoming the first mayor of Southern Pines in 1887. The house remained in the Shaw family until it was acquired in 1946 by the newly formed Moore County Historical Association in a grassroots effort to ensure its preservation.

The Shaw House property is open to visitors as an historic site. From the Pine Barrens to Shaw's Ridge to Southern Pines, the Shaw House is a constant reminder of the legacy of the town and its transformation from an intersection of ancient Indian trails to a thriving community. 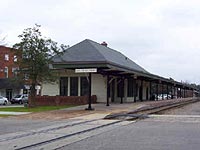 Rail service was critical to the development of the Sandhills region and the Town of Southern Pines. With the establishment of rail service into Moore County in the late 1800's came the expansion of the production of naval stores from the vast pine forests of the region.

Then, as the area became denuded of trees, efforts were made to encourage settlement. The train brought John T. Patrick, founder of Southern Pines, to the area known as Shaw's Ridge. He conceived the ideas of promoting the climate of the Sandhills to restore the health of consumptives and of building resort communities along the rail lines. 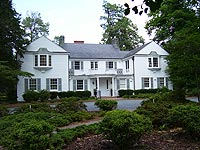 Weymouth was established in 1903 by Pennsylvania coal baron James Boyd as a winter country retreat. Later, as the home of his grandson, noted author James Boyd, it served as a gathering place for many prominent authors of the 1920s and 30s. Rescued from demolition and restored by Friends of Weymouth, it is now the home of Weymouth Center for the Arts and Humanities.

When he inherited the property from his grandfather, James commissioned architect Aymar Embury II to create a design from his sketches, incorporating a wing of the original structure. Embury, a renowned New York architect, designed many of the early homes and public buildings in the Sandhills area. 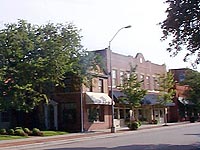 The essence of downtown Southern Pines is embodied in its unique array of shops. This streetscape includes historic buildings that-over the years-have housed an assortment of businesses providing life's necessities and pleasures in colorful and friendly style.

Downtown's present vitality is linked to its historic boom in the 1920's, when it first grew rapidly as a center of commerce and resort living.